Google is to meet data regulators from across the European Union to discuss the implications of the recent “right to be forgotten” ruling.

An EU court ruled in May that links to “irrelevant” and outdated data should be erased from searches on request, leading to censorship concerns.

The decision, and Google‘s handling of requests, has been heavily debated.

Speaking to Radio 5 Live’s Wake Up To Money, Christopher Graham said Google had a responsibility to deal with the issue.

“Google is a massive commercial organisation making millions and millions out of processing people’s personal information. They’re going to have to do some tidying up.”

Google, which has publicly expressed its disagreement with the court’s decision, is understood to have received more than 70,000 requests for links to be taken down since the court ruling was made.

Thursday’s meeting in Brussels will also include representatives from other search engines, such as Yahoo, and Microsoft’s Bing.

They will meet with a group known as the Article 29 Working Party, a gathering of data commissioners from across Europe concerned about the future direction of the “right to be forgotten” ruling. 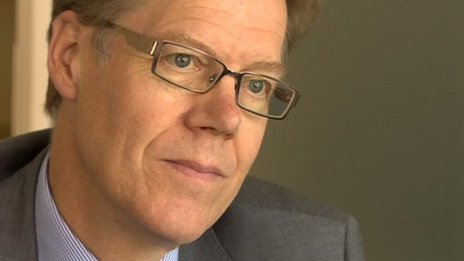 Christopher Graham said he expected many complaints about the ruling

Ahead of it, the Society of Editors – a group representing media organisations in the UK – has written a letter to Prime Minister David Cameron urging that the UK resists the ruling.

The society has warned that a “vital principle” over the free publishing, and archiving, of information is at stake.

As part of the “right to be forgotten” process, Google began notifying media organisations about links it was removing – including one relating to a blog post made by the BBC business editor Robert Peston.

Many organisations have been publishing new articles, highlighting the old ones that have been the subject of “right to be forgotten” requests.

Speaking to Bloomberg, the Irish data protection commissioner Billy Hawkes expressed concerns about this knock-on effect, which brought more unwanted publicity for the person who had requested the information to be de-listed from searches.

“The more they do so, it means the media organization republishes the information and so much for the right to be forgotten,” Mr Hawkes said.

“There is an issue there.”

However the UK information commissioner Mr Graham said that some of the concerns expressed by newspapers and broadcasters were overblown – and that there may have been some media manipulation on Google’s part.

“All this talk about rewriting history and airbrushing embarrassing bits from your past – this is nonsense, that’s not going to happen,” he said.

He said the censorship debate should not hide the fact that people should be allowed to move on from some incidents in their past.

“There will certainly be occasions when there ought to be less prominence given to things that are done and dusted, over and done with.